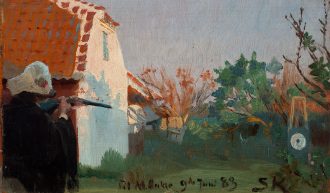 This picture was Krøyer’s first garden picture from Skagen. It was painted in Brøndum’s old garden (today Skagens Museum). The cropping of the picture and the sketchy brushstrokes give the painting the air of a snapshot. Several of his paintings from Brøndum’s old garden are very small and have the character of being almost painted diary notes of the communal activities of the artists. The painting depicts Anna Ancher shooting at a target placed on an easel. Her characteristic hat can be seen on several contemporary paintings and photographs. The gable of the old garden house is depicted on the left side of the picture, and in the background you can make out part of the old grain warehouse, which Krøyer converted into a studio in 1884. In addition to target practice, the artists also shared many other activities like bird shooting, garden parties, fireworks on the beach and champagne feasts, as well as trips out into nature together. 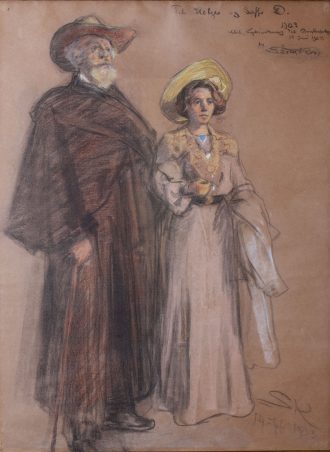