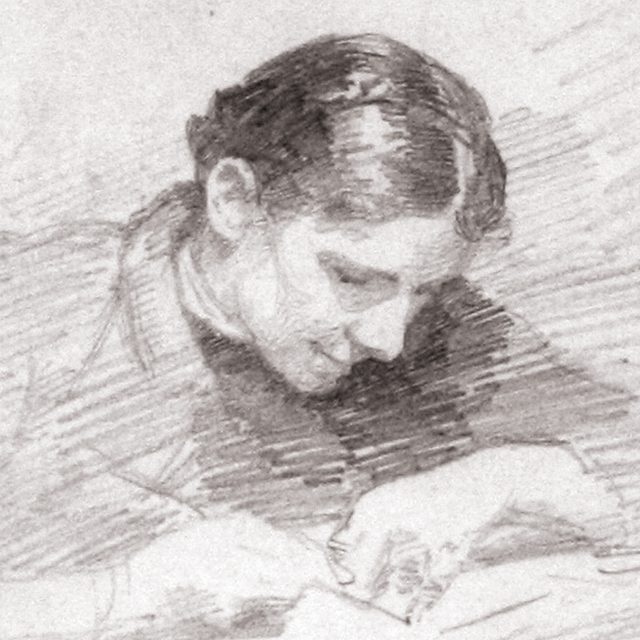 Marianne Preindlsberger was born in Graz in Austria, but she moved to Munich at the age of 19 and lived there with an aunt. She spent the next five years attending private art schools in Munich, and in 1880 she went to Paris, . Here she ,among other things, studied under the French painters Léon Bonnat and Jean-Léon Gérôme (1824-1904). In 1882 she had further tuition at the Académie Colarossi. The following year she went to Pont-Aven together with the Finnish painter Helene Schjerfbeck (1862-1846), and here she met Adrian Stokes.

This was apparently her only visit to Brittany. For although she and Adrian Stokes travelled a great deal, she never returned to this part of France. It is said that it was P.S. Krøyer who originally tempted Marianne and Adrian Stokes to visit Skagen, but it is not known exactly where they met each other. It was not in Brittany, because they were not there at the same time. On the other hand, Krøyer had exhibited in Paris every year from the beginning of the 1880s, so they could easily have met there. In his autobiographical notes, Michael Ancher writes of Marianne Stokes: “She was from Germany, a person of rare charm and a gifted painter with special colouristic gifts. She painted very little up here.” The reason why Marianne Stokes did not manage to paint much was perhaps that she was fully occupied with standing  as a model for Michael Ancher’s painting A baptism (Ribe Kunstmuseum) . A picture he had been working since 1883 and would finish five years later. When Denmark was invaded by by Germany in April of 1940, the portrait was placed in the museum‘s boiler room, and in 1943 it was among the 12 portraits that were placed in a box in Fyens Disconto Kasse and here they would remain until the war was over.