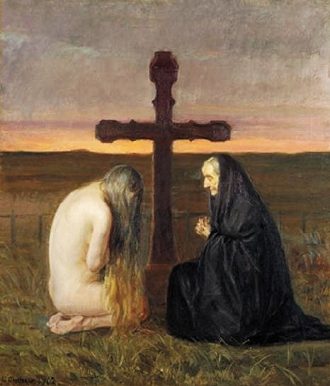 Anna Ancher was inspired by a dream to paint this picture. In an interview in connection with her 70th birthday, she said: “There was a time when I lacked subjects to paint. I thought about this day and night. And then one night I had a dream. I saw under a cross in a graveyard a meeting of a mother and daughter. The mother kneeled and the daughter bent over her. One of them had died. This meeting in the graveyard was so vivid for me that the next day I started to paint it.” We do not know whether the mother has folded her hands in prayer or despair, or even who the two women are, but Anna Ancher’s mother was the model for the mother. The painting represents one of the few examples of the otherwise naturalistic Skagen painter utilizing a Symbolist idiom. 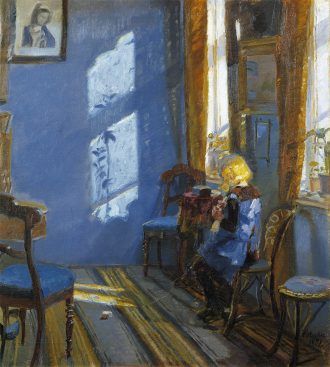