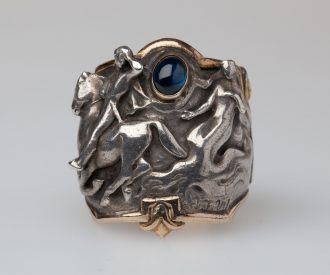 Soffi Drachmann had this ring made for her husband’s 60th birthday on 9 October 1906. It was designed by the artist J.F.Willumsen (1863-1958) and executed by the silversmith Georg Jensen (1866-1935), two of the most renowned craftsmen of the era. It was a distinguished gift. The ring is made of gold with inlaid oval sapphire and the relief is formed in silver. The motif comes from Drachmann’s play Sir Oluf, he rides. The Danish summer night drama, which was performed for the first time at the Royal Danish Theatre in Copenhagen as a tribute Drachmann on his 60th birthday. The music for the play was created by composer Carl Nielsen (1865-1931). It was inspired by an old Danish folk song of the same name and the people on the ring depict the main characters, Sir Oluf and the elf girl, who lures him away from his earthly bride.