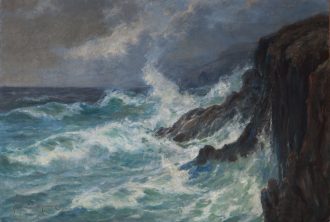 This is a dramatic picture. The waves in the blue-green ocean break violently on a high cliff in the foreground of the painting. The heavy grey clouds on the left side of the painting show no signs of an improvement in the weather. The image is deserted, and nature is uninviting. How the artist has ended up here is unknown, but he has felt compelled to depict nature’s rage, where even large ships could risk being crushed against the rocks. It is uncertain where Drachmann found the motif for the picture, but there are paintings and sketches in the house from his travels to places like Orkney Island, Newfoundland, Norway, Göteborg and Halifax, which all include sea, rocky coasts and archipelagos. They were all painted in the period 1898-1907 from his big trip to North America and until shortly before his death.