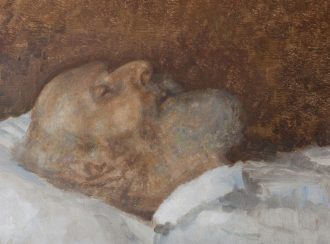 Drachmann died in 1908 at a clinic in Hornbæk. Julius Paulsen (1860-1940) painted him shortly afterwards on his deathbed. The picture may have been painted from a photograph that was reproduced as a centre spread of the Illustreret Tidende. This can also be seen on the opposite wall in the studio. The Art Museums of Skagen has a duplicate of the painting by Paulsen. The sculptor Anne Marie Carl-Nielsen (1863-1945) was present at his deathbed and created a cast of Drachmann’s face and right hand. The cast is now at the The Museum of National History at Frederiksborg Castle. It was common practice in the 19th century to depict deceased personalities, either by making plaster casts of their faces, or by painting or photographing them on their deathbeds. Anna and Michael Ancher and P.S. Krøyer were all photographed when they lay in wake, and Viggo Johansen painted Michael Ancher on his deathbed.