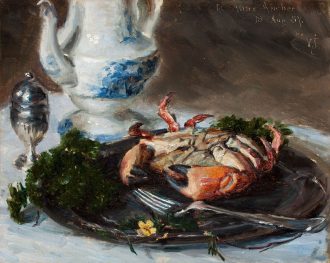 Viggo Johansen (1851-1935) is not as famous as some of the other Skagen painters, but was technically a very able artist and demonstrates his talent in still life painting with several vibrantly depicted motifs of fish, crabs, and a picture of a decapitated lamb’s head on a plate. The still life genre grew in popularity in the 17th century, arrangements of dead or immobile objects, often with a symbolic meaning, alluding to transience, as the focal point of the picture. If you linger at the painting a little, Johansen’s assurance in the arrangement of these simple objects, becomes clear. The orange-red crab is convincingly painted and evocative of Johs. V. Jensen’s poem ”At Lunch” (Ved frokosten): “O touch of sulphide and smell of iodine from the sea’s kelp forests!”. The painting was a gift from Viggo Johansen to Anna Ancher on her 28th birthday.