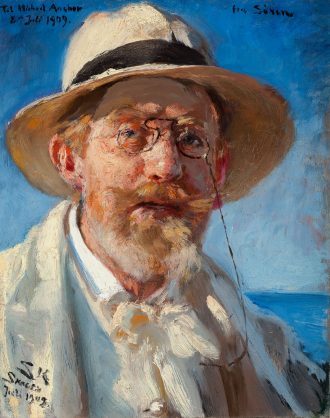 Krøyer’s last self- portrait is brutally honest and shows a sick, drained artist, who exhaled his last a breath three months later. Krøyer did not try to embellish his final self-portrait, and his slightly swollen and tired face also bears witness to his impending farewell to his beloved Skagen. The sight in his left eye had disappeared completely and his right eye was also starting to fail, so his previous sense of detail has given way here to looser and more rapid brushstrokes on the canvas. The self portrait functions well on the whole, because Krøyer has not lost his ability to conjure up something personal in the rendering. The staging of himself as a plein-air painter in Skagen was entirely conscious in Krøyer, and his position as a famous artist was exposed to a high degree in his self portraits. The painting is signed “8 July 1909 from Søren” and was a gift to his artist friend of many years, Michael Ancher.