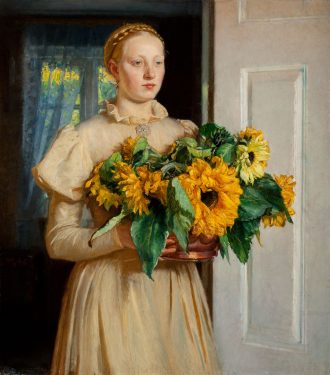 The model is Maren Brems, who was a maid for the Ancher family. She stands in the doorway between the South and North rooms in Anchers Hus; the light streams in from the North room, while the South room in the background is cloaked in darkness. In this version, Maren Brems is dressed in one of Anna Ancher’s dresses, and she stands with a copper vase containing a large bouquet of sunflowers. There were sunflowers growing in the old garden at Brøndum’s Hotel (Skagens Museum today), but there were also sunflowers in the garden at Anchers Hus.

A stroll on the beach
Michael Ancher