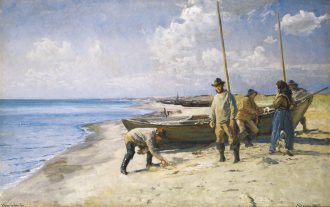 The painting depicts a situation typical for the fishermen of the period, returning from fishing and in the process of dividing the catch among themselves. Many fishermen were organised in guilds and shared the costs of the boat and the fishing gear as well as the income from the fish that were landed. The painting alternates between areas with a lot of detail to areas with such loose brushstrokes that entire elements are dissolved and become almost abstract. For example, a woman in the foreground has a face that is clearly delineated, but you have to guess at whothe figure leaning up against her dress could be. Even the fish, which the action of the painting revolves around, are reduced to shadows in the sand. It is thus difficult to judge whether the catch has been poor, or if the fish have been left out in favour of the overall expression of the picture. 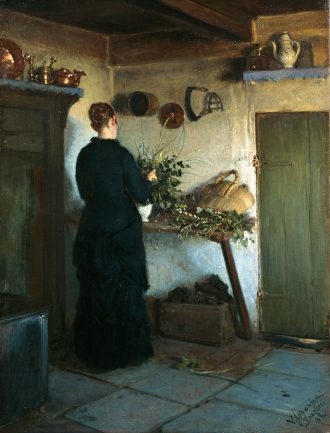